All news about AdrenaShip routing software

How Adrena has become what it is today

Adrena brought out its first software ten years ago, under the name of Optima. This software can calculate the coordinates of a sailing vessel using navigation data. This software is still on the market today, although it has been enhanced with new features and comes in three different editions: First, Standard and Pro. 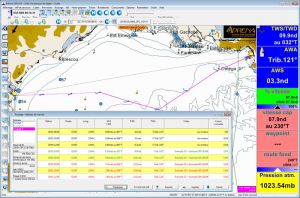 Adrena presented its first routing module at the 2006 Paris boat show. Since then, the company has continually evolved to become a world bench-mark in the field. Today, Adrena is proud to supply 100% of the Vendée Globe fleet, 90% of the Volvo Ocean Race and the vast majority of French regatta boats, whether they be competing in simple races between two buoys or in round-the-world events and ocean races.

This change of direction opened up many other fields of application beyond sail racing. Standardisation of weather data allowed this data to be used in the cruising field, which required the integration of engine use when searching for the best route. The mixed routing feature (sail/engine) was integrated in 2011.

The idea of the quickest time remained an important criterion for routing, but this new approach also integrated the notion of consumption.

Today, the increased importance of renewable energy and the need to exploit this for economic and environmental reasons go without saying.

This has given rise to new fields of application, and in 2009, we were chosen as supplier to the Planet Solar project. The objective of this was to sail around the world relying exclusively on solar power. Adrena supplied the software that allowed crews to manage both speed and route in terms of energy consumption and production, depending on sun predictions. Following the success of this first round-the-world in May 2012, Planet Solar launched another campaign for the planet.

Exploiting this new competence, routing for commercial and working vessels was ADRENA's next logical step.

In 2012, a ferry company ordered software that allowed it to optimise the engine speed of its boats on its commercial lines by taking weather data into account. The financial cost of fuel drives the need to optimise its consumption.

The next progression, which is currently being developed, is energy-efficiency routing for motor vessels. This will optimise fuel consumption by defining the best speed and route, based on a wide range of environmental data and legal factors that apply to vessels.