The transport of hydrocarbons and liquid gas by sea plays a major role in supplying energy throughout the world. A certain amount of risk is involved in transporting these, bearing in mind the very nature of the material and the containers in which it is transported.

As a consequence, the owners of both the ships and the cargo are primarily concerned about ensuring a safe passage. 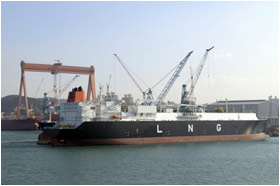 In order to ensure safe operations, AdrenaShip allows itineraries to be planned according to weather and environmental forecasts. By anticipating the sea state, swell and waves, AdrenaShip calculates a safe route that avoids dangerous conditions.
Managing how the vessel precisely behaves at sea makes these calculations more pertinent, thus allowing sloshing and slamming to be controlled.

AdrenaShip aims to exploit a new approach to fuel-saving by positioning itself as real-time, on board routing software.

The different functions of AdrenaShip software will allow the crew to choose the best route, not only so that they consume as little fuel as possible, but also making sure that they adhere to their planned arrival time in port.
In its calculations, the software takes into consideration the positive and negative impacts of the wind, currents, waves and navigation restrictions.

Details of AdrenaShip software features can be found below.