In a bid to remain competitive, freighters try to reduce their operating costs. The largest cost involved in operating a container ship is fuel, which represents 60% of the fixed costs of a passage.

The first initiative to be adopted was slow steaming, reducing the speed of vessels.

Other methods are being studied, including the design of the hull or low-friction anti-fouling. 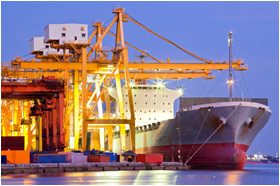 vichie81 © fotoliaThe different functions of AdrenaShip software allows the crew or a fleet centre to select the best route and optimum speed throughout a passage with the three-fold objective of:

In its calculations, the software takes into consideration the positive and negative impacts of the wind, currents, waves and navigation restrictions.

AdrenaShip aims to exploit a new approach to fuel-saving by positioning itself as real-time, on board routing software.

The coastal routing feature can reduce fuel consumption by regulating speeds and making the most of the impact of currents along the route. AdrenaShip routing software provides a route plan with recommended speeds. Ocean routing, on the other hand, first analyses a number of different routes at different speeds, taking into account the impact of weather conditions and navigational zones, and suggests a range of routes with their respective consumption and ETAs.

AdrenaShip also features another cost-saving benefit for freight transport - allowing you to control your ETA in port. This results in improved logistics management in terms of loading and unloading freight. Being able to postpone a dock slot in advance, depending on the vessel's actual ETA, represents a significant tangible saving in a vessel's operating costs.
For example, a container ship can very easily find out if it can still arrive at its slot in Dunkirk dock on time despite leaving Montoir de Bretagne three hours behind schedule, or whether it is better to postpone the slot and reduce speed (saving fuel and port fees).

Details of AdrenaShip software functions can be found below.