Maritime passenger transport on frequent routes represents a significant share of maritime transport. One of the operating constraints that ferries face is the need to adhere to strict turnaround times. Furthermore, ferries often operate in zones where there are strong currents, such as the English Channel or the Raz de Sein. They rarely enjoy freedom in terms of route, due to the proximity of the coast and, often, heavy traffic.

AdrenaShip coastal routing is based on a new approach to saving fuel by positioning itself as real-time, on board software that provides speed recommendations while keeping to the most direct route.

The different functions of AdrenaShip software allows the ferry crew to adjust the speed throughout a passage with the three-fold objective of:

In its calculations, the software takes into consideration the positive and negative impacts of the wind, currents, waves and navigation restrictions. 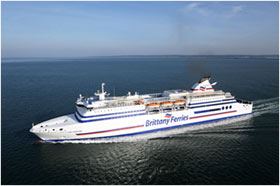 In order to adhere to the route's schedule, a crew could consider whether to use an extra shaft line to make sure that the vessel arrives in port on time. AdrenaShip software will help make this decision by forecasting the speeds required throughout the passage to ensure a punctual arrival. The crew can easily judge whether they need to add more power or not. The fuel savings that can be made by avoiding the use of another shaft line are substantial and can be measured directly.

AdrenaShip - a planning tools for turnarounds

AdrenaShip software can also be used as a planning tool to forecast turnaround times for ferry routes. It takes tide and current forecasts into account in order to optimise schedules on frequent routes.

Details of AdrenaShip software features can be found below.