CMA CGM is one of the first AdrenaShip software users and is well known and recognized in the shipping field. Since its foundation in 1978, the Group has been developing with passion. Jacques Saadé is the man who has built in only one generation a family group that has become a leading worldwide shipping group.

Mr Bara has been working at CMA-CGM for more than 5 years. He spends part of his time working at sea as deck officer and the rest of the time he works ashore in the fleet center where he has a support function.

You are one of the first users of AdrenaShip Navigation Software. How long has CMA-Ships used AdrenaShip?
AdrenaShip has been used by CMA-Ships since 2014, following a decision taken by the company to optimize currents analysis on vessels' routings.

Which elements did you find in AdrenaShip software that you did not find in other routing software you were using?
Two main characteristics:
- The possibility to use any weather or current forecast file whatever the source is, as long as it is in grib format; whereas the other software that we were using are imposing the source.
- Currents and weather forecast are both taken into account by AdrenaShip software with the same importance whereas other software do not pay a lot of attention to currents data in routing calculation.
In addition, the possibility to follow accurately the gap between the routing forecast and the real track of the vessel is not only very interesting but also... reassuring.

On which shipping lines do you use the software?
The target lines are the ones linking Europe to the Far East because weather forecast is seldom discriminating for routing: as a consequence, the current is a key factor that allows an optimization of fuel consumption.
Two ships on the Europe Caribbean line are also equipped with the software as an exploratory work.

What are the benefits brought by the use of AdrenaShip software?
The most immediate benefit is made in areas in which tides currents are well known and ports of call numerous such as the Channel and the North Sea: AdrenaShip software allows us to optimize fuel consumption during passages as well as to check the feasibility of the ship programme step by step in order to avoid unnecessary expenditure.

The expected benefit in the medium term is to make savings on all of the crossings between Europe and Asia thanks to the optimization of currents analysis. However, the benefit is more dependent on the accuracy of forecasts data than on the software calculations. CMA-Ships is working on their reliability in contact with the oceanography field and expects a first operational service in the beginning of 2017. All the preparatory work related to this field was made thanks to AdrenaShip and the ability of Adrena company to adapt the software so that it can fit the particular CMa-Ships needs. 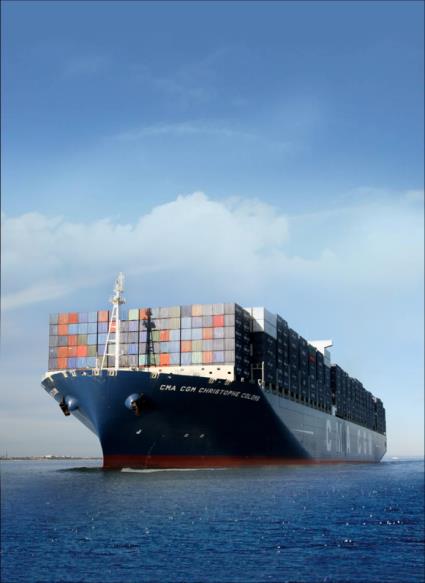 What is your organization at the bridge?
From now on routing is the first step in the preparation of a passage. The route that is recommended by the software is converted into the "Passage Plan" after checking all of the requirements in terms of regulation, hydrography and traffic. During the crossings, routing is updated as much as needed, especially when the ocean basin changes – for example on a crossing of the China Sea after the Singapore Strait – or when an element linked to weather or current forecasts has significantly changed.

Could you let us know some practical cases on the use of the software in terms of ETA management, fuel savings, etc.?
Fuel savings: they depend on the reliability of the downloaded forecasts data. 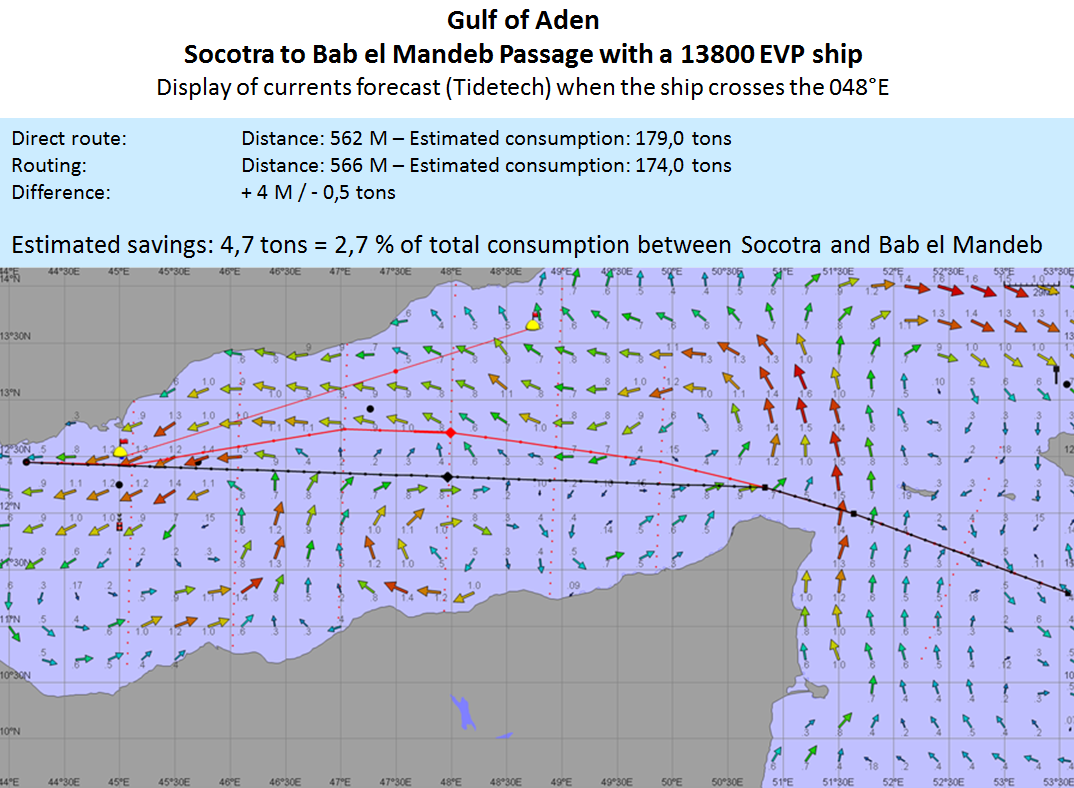 Cape of Good Hope (September 2016). The usual route is in green. The routing provided by AdrenaShip and adopted by the Captain – in red – avoids the strong opposite currents area in the South of Madagascar. Expected savings: about 45 tons of fuel between South Africa and Reunion Island. 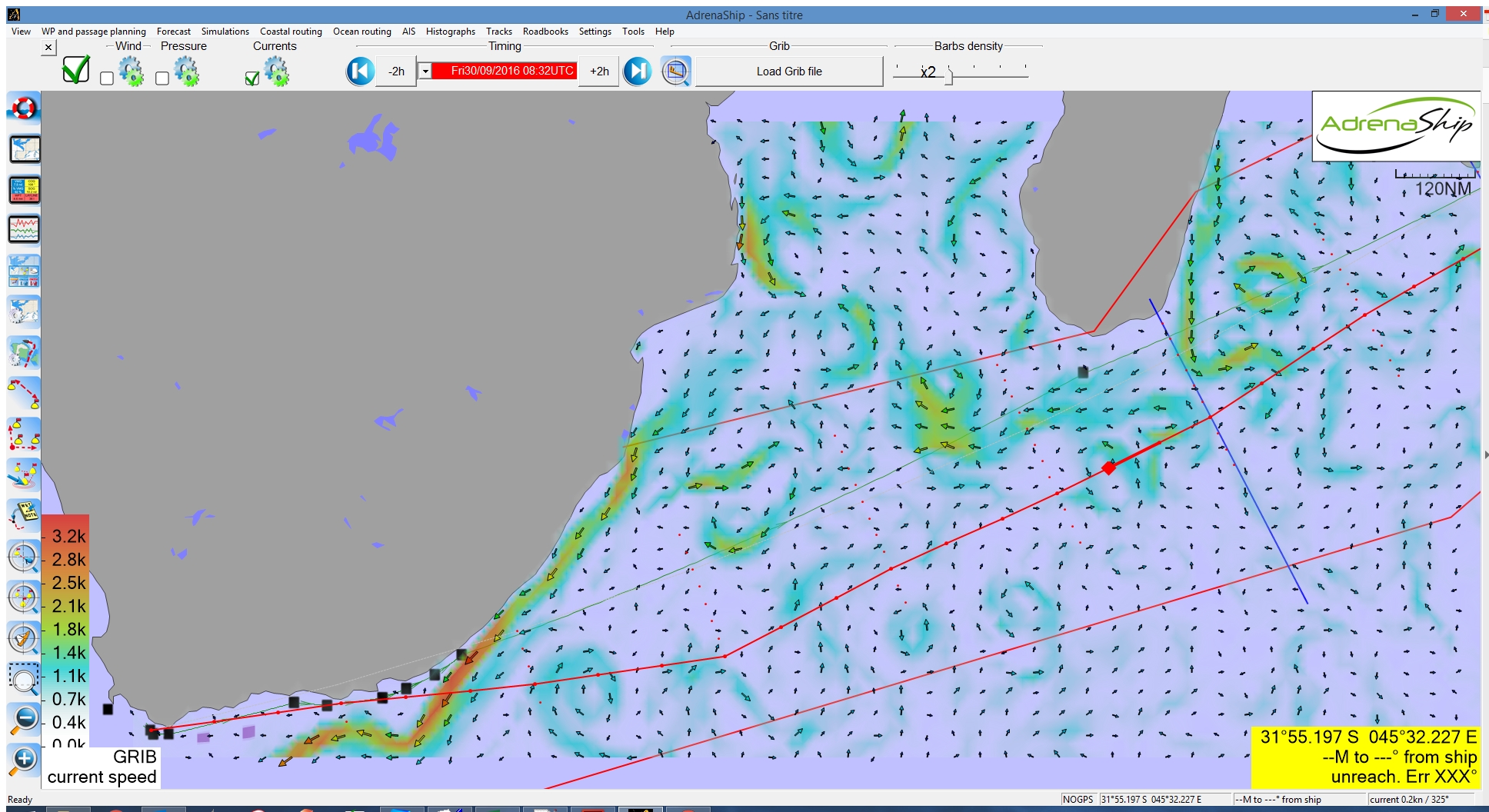 Savings made with the simulation: they are significant even if they are occasional and mainly located in tidal stream areas. Here is an example:
In January 2014, the schedule of a container ship (5700 EVP) was disrupted because of bad weather in the North of Europe. Its speed of crossing from Rotterdam to Hamburg was planned to be close to its maximum speed. Intuitively, the respect of the ETA seemed to be uncertain but still possible. However, the simulation made on AdrenaShip confirmed that ETA could not be respected because of the currents. The software provided concrete elements to the company in order to anticipate the arrival time difference to call in at Hamburg. Thus, thanks to AdrenaShip, the company avoided useless port charges and allowed the vessel to cross at an economical speed. We made an economy of about 13 tons of fuel.